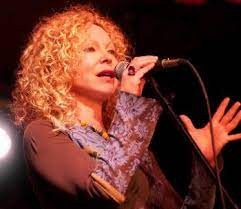 Lenka Lichtenberg, a world-renowned singer in many languages including Yiddish, has chosen Mother’s Day, May 8th for her concert and CD release of her latest work, Thieves of Dreams: Songs from Theresienstadt’s Secret Poetess.  The date is appropriate because May 8th is also the anniversary of the liberation of the Theresienstadt concentration camp where her grandmother and mother were interned for years. 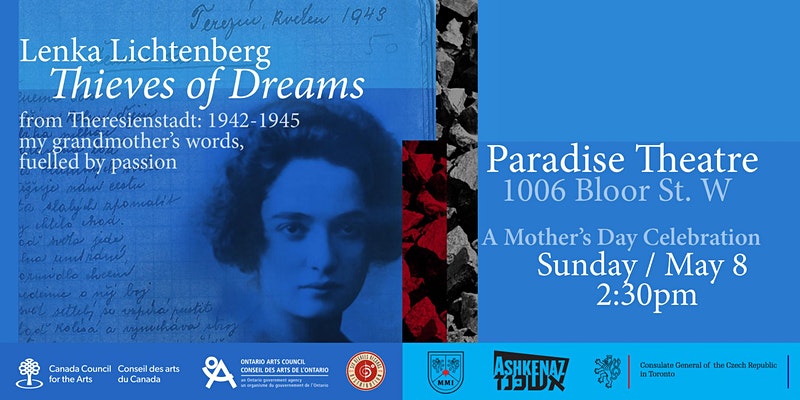 After her mother passed away, Lichtenberg came across poems written during her grandmother’s internment. The poems were written as an almost daily means to survive the horrors of life. In tribute to her grandmother, mother and all the people who perished in or survived the camp, Lichtenberg turned this poetry into songs. What came as a surprise to Lenka was the fact that the poetry was so intimate. Many poems were fantasies and love poems. The poems were a way for her grandmother to persist in an environment where one was always on the brink of death.

Lichtenberg commissioned seven Czech and Canadian women composers to put the poems to music. There is a string sextet, a beatbox number and spoken word, as well as a jazz trio and art songs. Most of the lyrics are in their native Czech and not in Yiddish. Lichtenberg’s family, as was the case with most Jewish families who grew up in the region, did not speak Yiddish. As citizens of the Austro-Hungarian Empire Jews spoke Czech and German, and depending on which part of the country they were raised, learned Polish or Hungarian as well. Surtitles with English translations of the lyrics will be shown during Lichtenberg’s performance.

Lichtenberg’s development as a young, Jewish singer is essential to understanding the development of her career. After the war, partly because religion was frowned upon in countries under the Soviet sphere, but also because her mother (who had married a Christian man after the war) felt that she had no affiliation to any religion, Lenka was not raised with a Jewish education.

Finding her place in the Yiddish music community was somewhat disorientating in the beginning. She commenced her education by listening to the music of Theodore Bikel and Chava Alberstein. When it came time to go out into the Jewish community to celebrate her heritage, she discovered that audiences regularly wanted to hear a certain type of Yiddish music, that is old Yiddish “standards” and songs very specific to the communities of the past. That was not the style that interested Lenka the most.

Lichtenberg sees herself as an artist committed to contemporary Yiddish composition. For her, Yiddish is not a language that is lost, but one that is continuously being reborn, and while she loves singing traditional Yiddish songs as well, this is the type of Yiddish music Lenka continues to create and celebrate today.

Lichtenberg has found her greatest success singing in her home country, the Czech Republic. Many of the performance spaces today are former synagogues, and the population is passionate for her performances. She has no problem filling an auditorium.

Thieves of Dreams, the concert and the release of the album (eventually available on major streaming services around the world) is just the beginning of what Lenka plans to make a multi-part artistic project. She has already started thinking about turning the poems into a play and there are plans to publish the poems simultaneously in Czech and English. She hopes to return to Theresienstadt to perform her grandmother’s poems where they were originally written and to have the concert filmed. For Lichtenberg, this is the greatest tribute she can make to her family and to all the Jews who suffered during the war years.  What becomes of this work based on her grandmother’s found poems will no doubt bring great wonder and joy to those of us who relive these works with her.

The new album release performance will take place at the Paradise Theatre on Bloor Street in Toronto on Sunday, May 8th at 2:30 p.m. Complete information about the project and a few selections from the album are available at lenkalichtenberg.com.