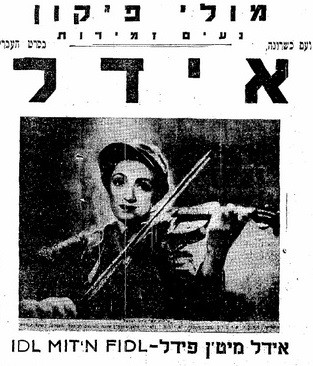 Why Am I Studying Yiddish?

Why am I studying Yiddish, I ask myself. I certainly didn't want to as a child when my mother enrolled me in after school classes with Mrs. Rheinhartz who conveniently rented a room twice a week at my elementary school. I was about 8 or 9 and generally a good student and an obedient little girl, but something about the slow moving, pedantic Mrs. Rheinhartz and the infantile textbook, I still remember the opening page – Dos iz Sorele; Dos iz Berele – turned me into a vilde khaye (wild animal).

I did not behave. I disturbed the class. I did not appreciate the greasy latkes served at Chanukkah. In retrospect, I think my mother thought learning Yiddish would help me communicate with my grandfather who had moved in with us after the death of my grandmother; but that was a lost cause. Zaidy barely looked at me, never mind talked to me. My disruptive behaviour at Yiddish class continued and by Purim, I was gone. Hebrew school was not much better.

And now, now I am spending every Wednesday evening attending my Beginner Plus class on Zoom. These classes are offered by the UJA Committee for Yiddish. My second term has just ended and we learned how to form the past tense, when to use articles, how words need to change when in the objective case, forming plurals and lots of vocabulary. On top of that, learning to read a whole new alphabet and sound system is challenging. It's hard and I'm someone who likes language study and grammar.

There are people in my class who are reluctant to read Yiddish. As older adults with no experience with written Yiddish, they focus on speaking and use the transliteration provided to read. I'm not one of those students. I read very slowly, but I am improving! Fluency is probably hopeless, but despite that, I enjoy the classes immensely. Our teacher always starts the class with a saying or a joke which will be written in Yiddish and in transliteration. For example,

This type of opener leads to a fun discussion with students trying to use Yiddish as much as they can.

We also listen to songs. Ruth, our teacher, digs up YouTube clips of big Yiddish theatre stars of yesteryear such as Molly Picon singing Idl Mit'n Fidl in the famous movie of the same name. She introduces us to newer, less known stars singing well loved Yiddish songs such as Oyfn Pripetshik (By the Hearth), a lullaby, which was a tremendous hit in the 19th century and through to the 1930s. We learn about the vibrant Yiddish theatre and music scene in North America and in Europe in the early 20th century. We even enjoyed scenes of "Fiddler on the Roof" in Yiddish which was performed recently in New York and possibly elsewhere.

I had, of course, heard of the great Yiddish writer, Sholem Aleichem, but I had no idea how loved he was until I learned that when he died in 1916, his funeral was the largest New York had ever seen. More than 150,000 people accompanied his coffin from his home in the Bronx to the Ohab Tzedek Synagogue in Harlem to the cemetery in Cyprus Hills. This class has given me greater respect for my own culture, especially our great writers and musicians who have enriched the world.

Lessons often centre around holidays. We really got into Chanukkah, Purim and Passover by practising dialogues and reading stories that involve the themes and customs of each holiday. We had an opportunity to sing and listen to songs for these holidays that we had never heard before. The dialogues are always lighthearted and make us laugh. For example, two matrons are discussing their preparations for a holiday and one constantly has to outdo the other; “I'm going to buy food for the dinner,” says one. “I've already bought everything I need,” replies the other. “I'm going to bake today,” says the first one. “I've already baked many cakes,” the second one crows. It continues and matron #2 doesn't give an inch. We are put into break out rooms during our Zoom classes to practise the dialogues with a partner. As we practise, we learn about each other as well as Yiddish.

Although the class originates in Toronto, we have participants from small towns in Ontario, Western Canada, and a couple from the U.S. Most participants are middle-aged or better, but there are two younger people and surprisingly, we have a non-Jew in the class. He's one of the better students. He told me he wanted to learn Yiddish because he's writing a play that takes place in Europe during the Second World War. I understand he would like to include some Yiddish, but I don't think he needs to study in depth. I think he just likes it.

And it is the saddest language as well. The lullaby Oyfn Pripetshik describes a Rabbi teaching young children the alphabet. In one verse, he tells the children,

And that of course, is central to any study of Jewish life.