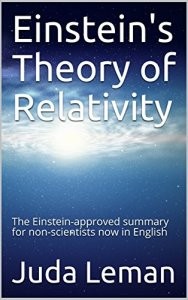 A Yiddish-Language Presentation by Jordan Chad

In 1921, Albert Einstein supervised the preparation and publication of a book that arguably became the most concise and accessible summary of his renowned theory of relativity. Written in Yiddish by Einstein's student Judah Leman, this book introduced Eastern European Jews to Einstein's theory. This lecture examines the significance of Leman's book in conveying the theory of relativity to a broader audience.

Jordan Chad is a PhD Candidate in Theoretical Physics at the University of Toronto. In addition to his doctoral research, Jordan studies and translates Yiddish-language scientific works that were written in pre-WWII Eastern Europe. He also organizes a Yiddish-language conversation group in Toronto. He recently translated  Einstein's Theory of Relativity by Juda Leman from Yiddish into English.