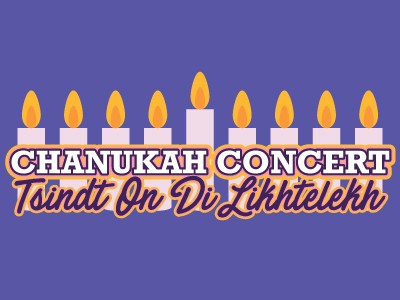 Celebrate the Festival of Lights and enjoy your favourite Chanukah songs performed in Yiddish, Hebrew and English. This virtual event included a special musical performance from the MNjcc’s Thomas & Marjorie Schwartz Preschool Centre and a candle lighting ceremony led by CFY's own David Gale and the Yiddish Theatre Workshop Fall 2021 students.

So bring your own sufganiyah and feel free to sing along from the comfort of your home!

The virtual concert featuring Bernice Gopin and Jordan Klapman was presented by the Miles Nadal Jewish Comminty Centre on Thursday, December 2, 2021, in partnership with the UJA Committee for Yiddish and Baycrest@Home. 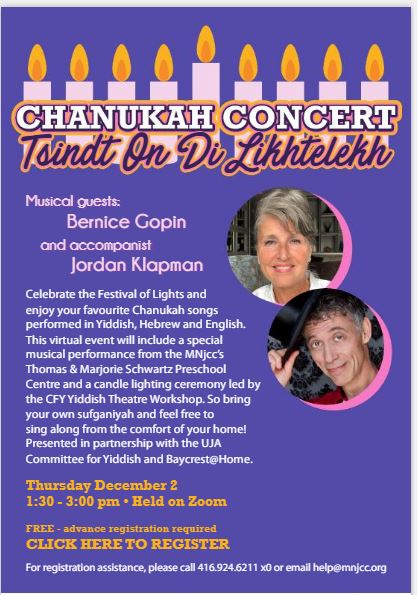 Bernice Gopin is a singer/entertainer and a Toronto native. She performs primarily but not exclusively for our senior community. Bernice sings in a variety of styles and genres which run the gamut for Broadway, American Songbook, soft rock, folk, easy listening to international, cultural, classical and opera. In addition to English, she sings in a number of languages, namely Yiddish, Hebrew, Ladino, Spanish, French, Italian and Russian. A seasoned chorister for over fifteen years, Bernice augmented choir work by going solo six years ago. As a solo artist, she has performed at well over fifty retirement and senior care facilities and a number of senior clubs and centres in Toronto and the GTA.

Jordan Klapman is a pianist, bandleader, music director, recording producer, and popular music educator. Since 1977, he has specialized in the performance of 20th-century popular music, including ragtime, traditional jazz, Dixieland, 1920s/30s salon music, Big Band, The Great American Songbook, Broadway, and klezmer. He can be heard in music festivals, jazz clubs, concert halls, and theatres across Canada and beyond. Jordan has appeared at Roy Thomson Hall, Koerner Hall, Birdland in New York City, on CBC Radio and television, and as a radio show co-host on JazzFM with the late Jeff Healey. Jordan teaches courses on the appreciation of 20th century popular music at many adult education institutions, synagogues and Jewish organizations across the city, including of course, at the Miles Nadal JCC. Jordan has also performed at many MNjcc concerts and music events, including our Big Band Concert & Swing Dance, Puttin’ on the Ritz Concert & Dance with The Wintergarten Orchestra, Can’t Give You Anything But Love Valentine’s Concert with the Tanya Wills Quartet, and in 2020, the virtual concert You’ve Got a Friend: The Hits of Carole King.