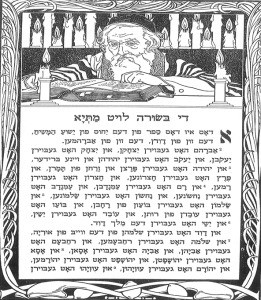 A Lecture by Professor Naomi Seidman

For four hundred years, beginning in 1540, the New Testament was translated into Yiddish perhaps twelve times, usually by missionaries and/or converts from Judaism to Christianity. This lecture will trace the history of the Yiddish New Testament, focusing on the shift between the earlier translations that stayed close to Luther's renowned German translation, and twentieth century translations that attempted to produce a more Jewish Yiddish, and hence a more Jewish Jesus.

In 2018 Naomi Seidman became the Chancellor Jackman Professor of the Arts in the Department of Religion and the Centre for Diaspora and Transnational Studies at the University of Toronto. Her several books include Faithful Renderings: Jewish--Christian Difference and the Politics of Translation (2006), and Sarah Schenirer and Bais Yaakov: A Revolution in the Name of Tradition (2019). She is currently working on a study of Freud and Yiddish.